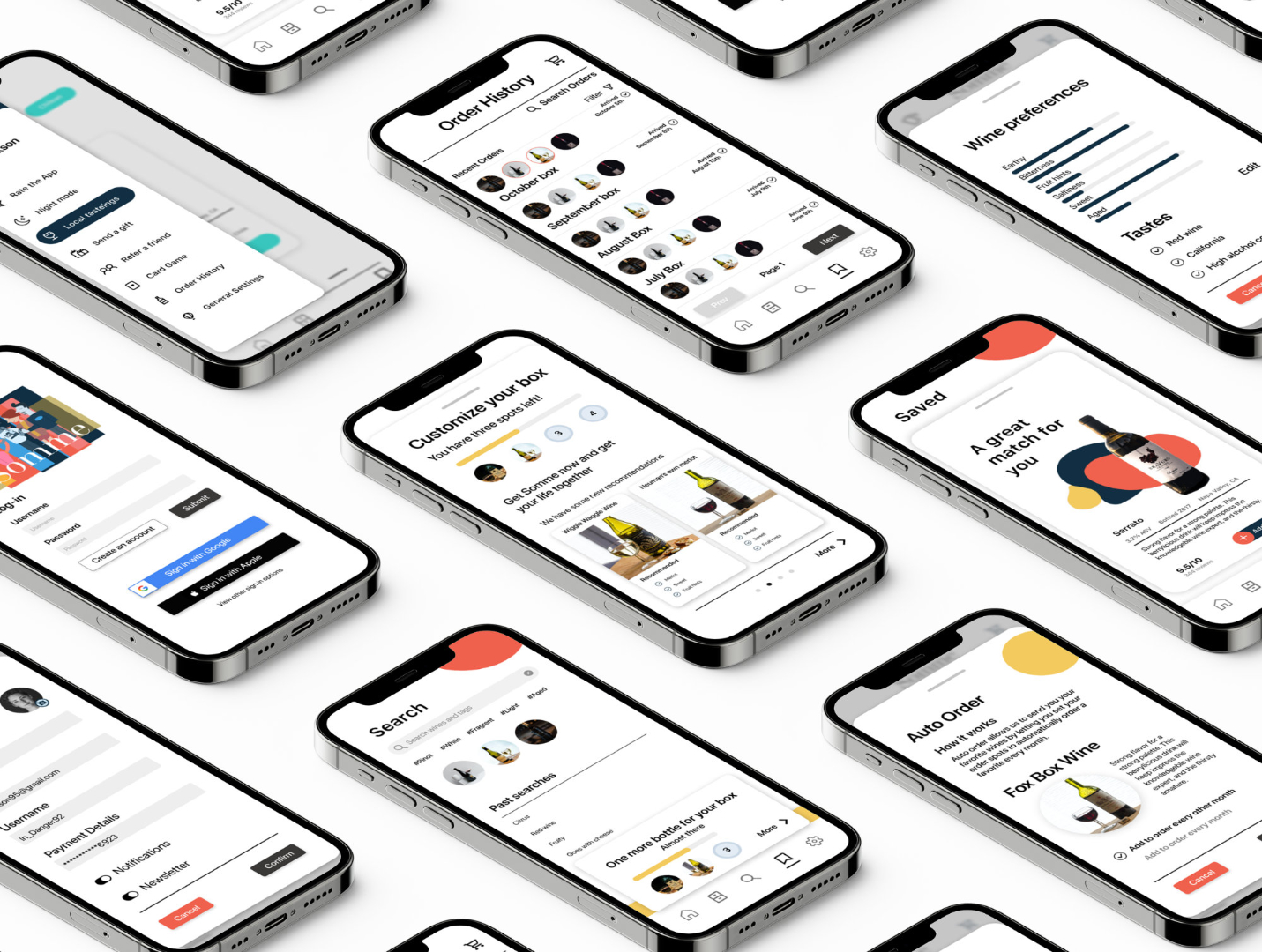 For this project we were tasked with creating a product that makes wine accessible and teaches younger less experienced users some of the finer points of wine via a subscription service.

6 weeks at the time of project with 1-2 weeks of revisions.

Working with Melissa Hueves, Alex Clokey My role was to focus on Mobile Design, UI/UX, Illustration, System design, Product Design, Branding, Motion Design, and General facilitation
Framing the Problem
“How might we design a better wine purchasing experience that educates and is accessible?”
Research
For this project we invested a large portion of our time into conducting research. The work was done both individually and collaboratively.
Areas of research;
Table top research
For the initial research we tried to find and explore trends in the market as far as approaches to four main areas.
Key takeaways competition
Clubs which offer curated recommendations usually seasonal tend to emphasize membership and appeal on authority of their taste, source, or recommendation.
Wineries/distributors that create a service that sells in-house wines as a means of supplementing existing business or to be relevant.
Modern apps. Tend to be more modern less conventional wine marketing, tend to try and offer some level of education on wine. Generative recommendations are often computer assisted.
Mobile App
For the app we decided to focus on one platform targeting iOS for the design. For the styling I produced a mobile design system to be used within the app. 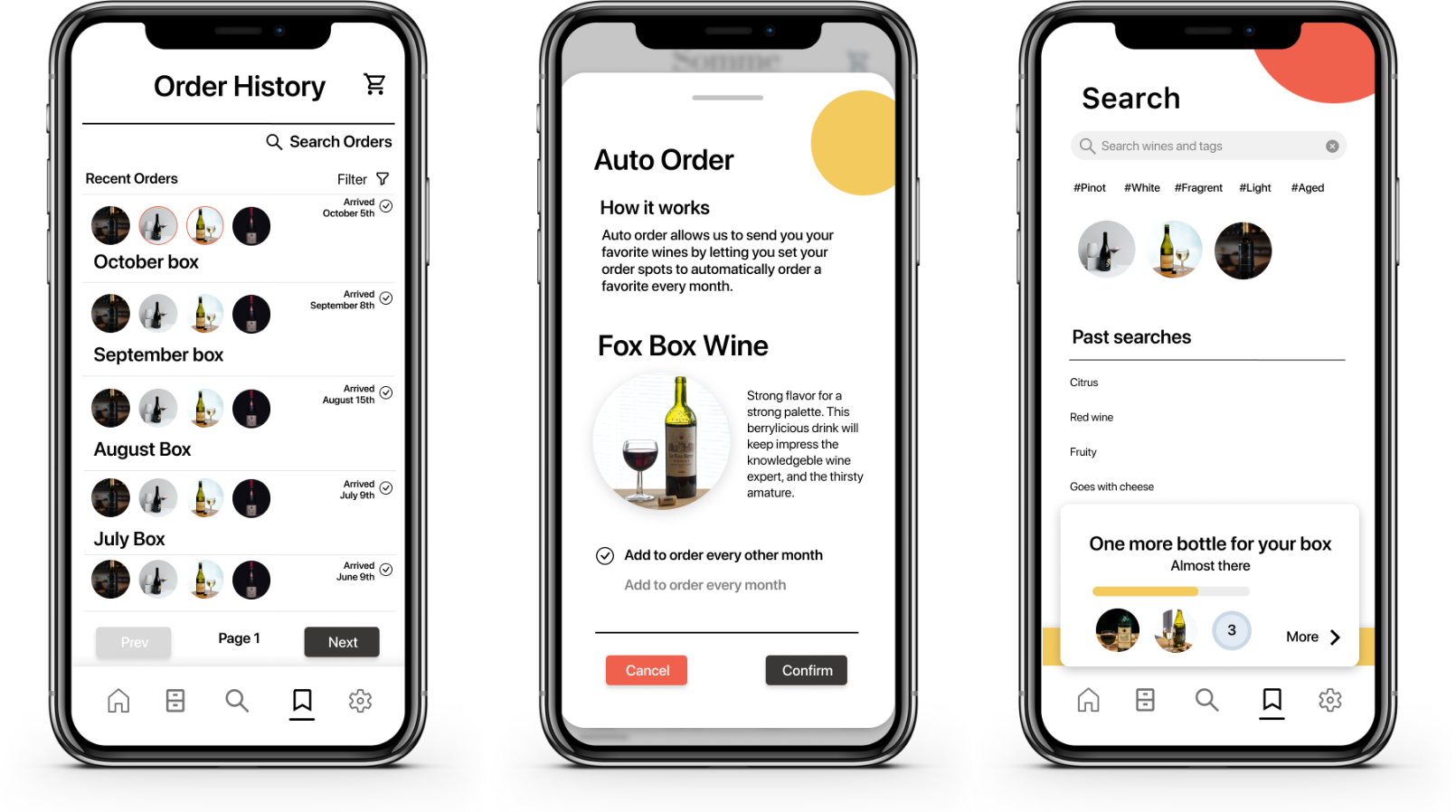 Design System
For the app we decided to focus on one platform targeting iOS for the design. For the styling I produced a mobile design system to be used within the app. 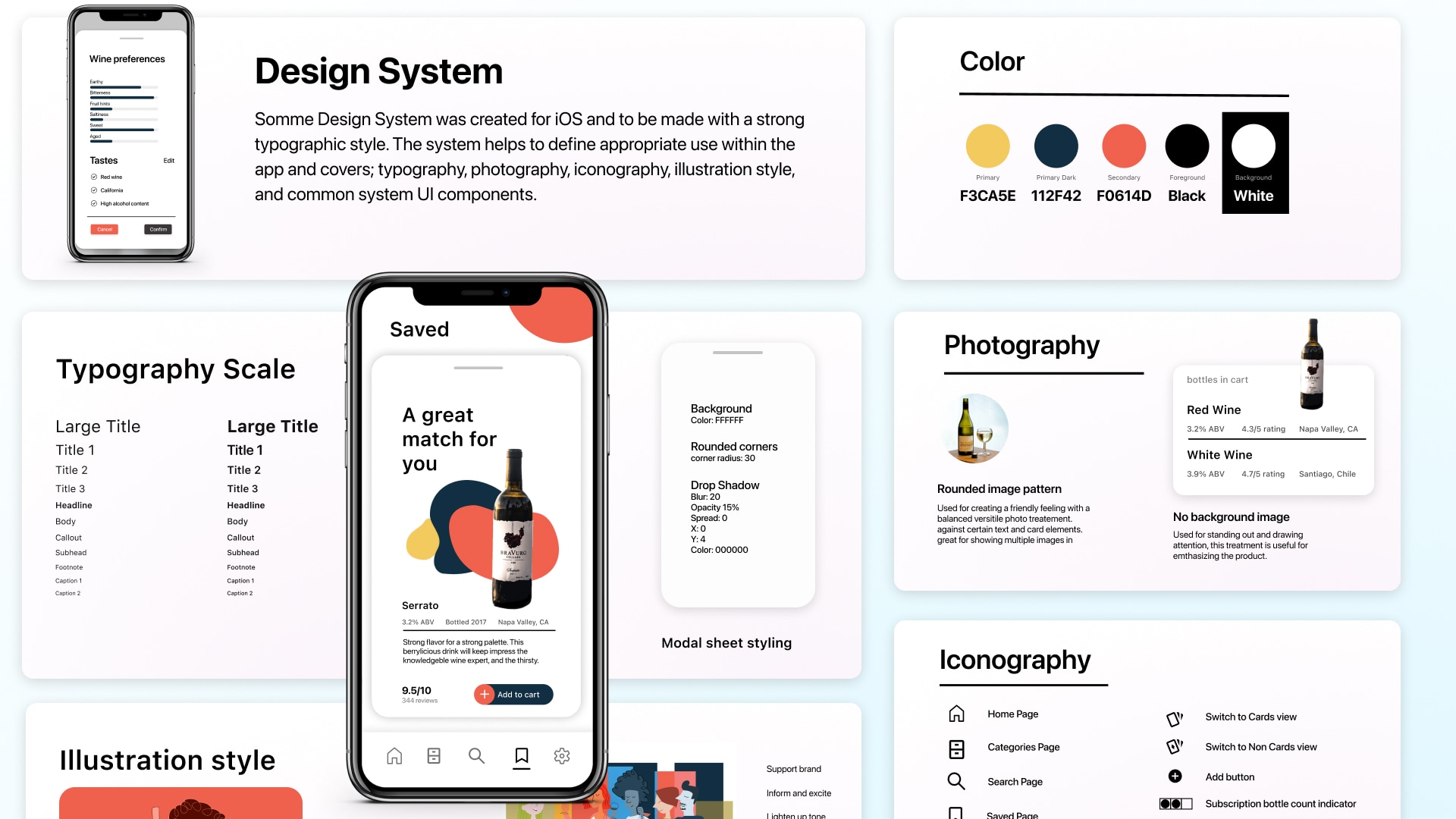 Illustration Style
After meeting we noted that product photography was used almost exclusively in all of the major competitors in the wine space. With that in mind we decided that using illustration would be a good way to accomplish our brand goals.

We selected several illustration styles and after reviewing during a critique session we decided to go with monoline Cartoon Modern style. I was then tasked with creating the illustrations, I had not illustrated in this style before some it took some studying of references to get the designs looking close to what I intended. 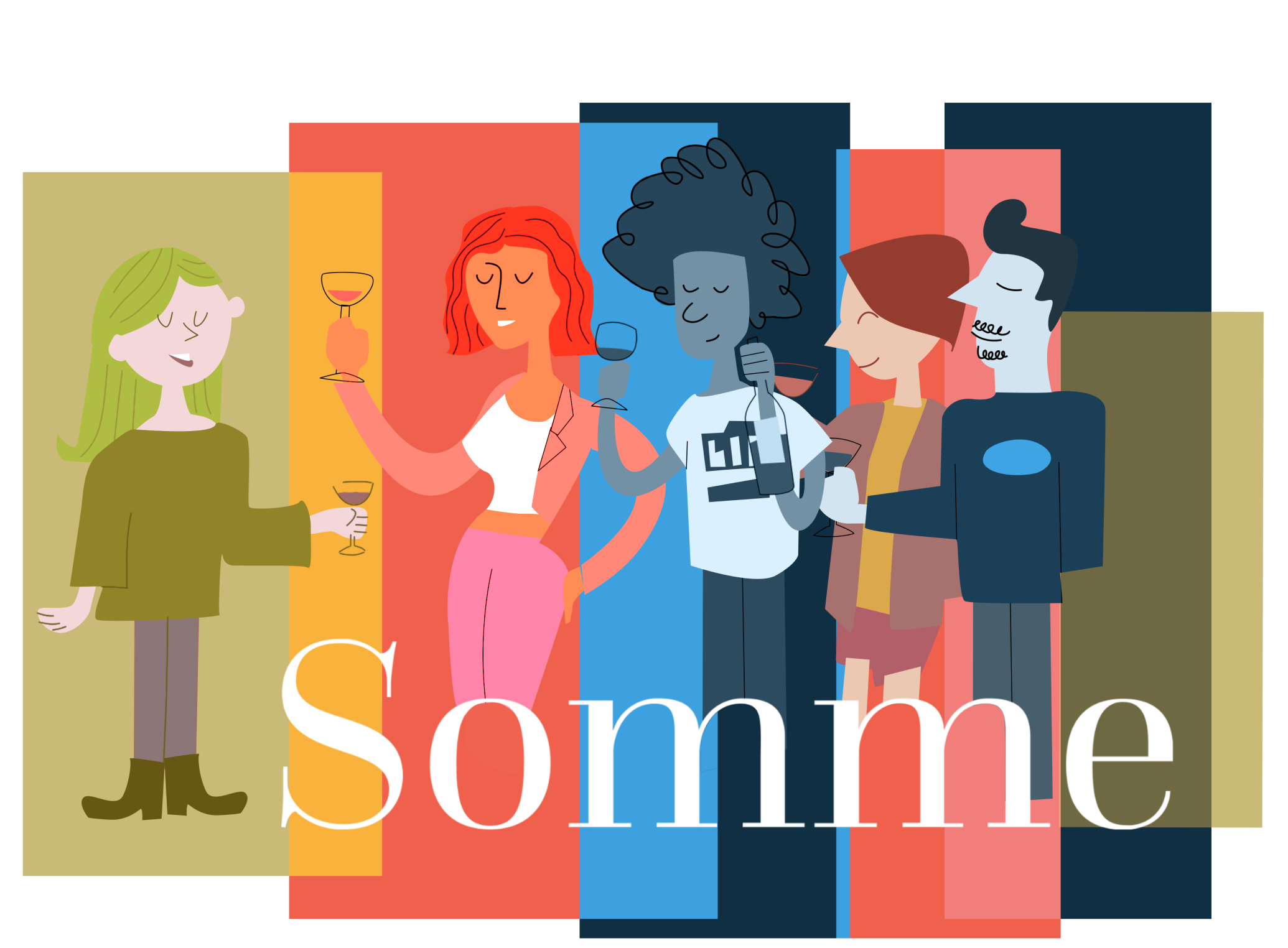 As part of a group project Fall quarter 2020 we were tasked with creating a wine app. The assignment was completed across 8 weeks.

Many people feel intimidated when asked to choose or purchase a bottle of wine, especially for new social situations. Design a wine selling website that removes snobbery and intimidation while minimizing the ‘paradox of choice’. Make it accessible, relatable, educational. Consider the mental models of a ‘Club’, a community, a subscription, a CSA, etc. When customers understand the process, they buy more wine. Consider online quizzes, drinking games, info cards, a companion app, and social sharing. The goal is to make wine education fun and relatable.

For the initial research we tried to find and explore trends in the market as far as approaches to four main areas.

Services in this space tend to break down into three categories;

The prompt had already defined our audience as well as goals and what we are making in detail so for this project we were not addressing that in our initial exploratory research.

For exploratory research we wanted to create a survey. For the survey there were a few more important points that we wanted to find out. First the context in which people enjoyed wine.

After the survey in the meeting to discuss the results we found that our results had issues around the questions on subscriptions services. On review we had accidently biased the results by mentioning other subscription services in an earlier question. The following question was interpreted by some to compare the services which was not really information we were looking for.

During the research phase of the project we were encouraged to make a user persona initially.

After our initial research we moved towards in depth interviewing. We were able to get two candidates one who was very new to wine and one who was significantly more knowledgeable. We met as a group to determine questions and met again after the the interview had been conducted.

We later updated our persona’s after our research with a different format to try and better reflect our user.
Below is the updated persona showing the less experienced in wine.

When approaching the problem we came up with a non-conventional solution to our main goal of making wine less intimidating and educating the user about wine.

Our solution is the Somme Card Game. The game is similar to games like cards against humanity in that it is played socially with friends with user generated interaction based on prompts.

After working together we defined the details of the game and did some Miro board testing with a prototype version of the game.

For our branding we wanted to have something that reflected that we were different from other wine services operating in the space.

We went with a type based logo mark for versatility in representing the brand.
‍

After meeting when we decided illustration would be a good way to accomplish our brand goals this as product photography was used almost exclusively.  We selected several illustration styles and after reviewing during a critique session we decided to go with monoline Cartoon Modern style. I had not illustrated in this style before some it took some studying of references to get the designs looking close to what I intended.
‍

For the mobile app component of our assignment I was the designer. One item that I created and began updating early on was the mobile style guide.

Below I have highlighted some interactions featured in the design.

Focus was placed on both the check out and log-in experience including  use of illustrations as a means to create a positive interaction at these points.

How you start and how you finish are important for how the user perceives and remembers the interaction.

Greets customer prompts them with recommendations for new wines as well well as advising them of available slots in their order box.

There are two branches in the final flow, the primary branch deals with anything directly related to the user selecting a wine and creating a basket/order box. The second main branch deals with everything else in the app not directly tied to that, such as card game information account settings and help.

In review there was a lot that was engaging about this project and I think a lot went well. I thought the solution that we developed was a fun but effective way to address the core problem. I thought that we communicated well as a team through out the project. For the mobile section I was overall happy with the result and level of consistency given the number of screens and the short time frame. Overall though still tons that could be improved as far as finer details copy and functionality and user testing opportunities.

User Interface/Experience Design, Mobile Design, System Design, Web Design
Project Overview
To create a product that makes wine accessible and teaches users some of the finer points.
My Contributions
“How might we design a better wine purchasing experience?”

Want to work together?

If you like what you see and want to work together, get in touch!